Some types of play take more trust than other types of play, not only from the submissive, but from their Dominant as well.  You can see this sort of play in this photo set with Miss Chaos. 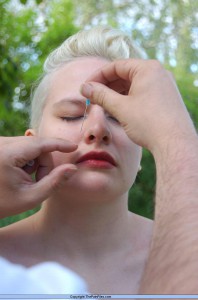 Outdoors in the countryside, the blonde slave has to trust her Master as he places needles through her lips.  She needs to know that He isn’t going to damage her as she submits to this humiliating and dehmanising treatment.  Disfiguring someones face is a powerful show of the control you have over them – that you can take even their most prominant feature, the facade that they show the world and change it to your own will, making them as beautiful or as ugly as you choose. 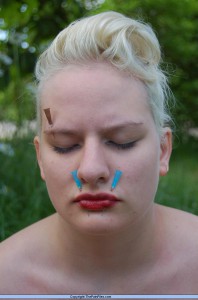 But when you are working in an area as intimate as the face, the Dom has to trust the submissive.  He has to trust that she wont move and cause injury to herself.  This is really an intense test of if his training is working, if she is able to hold the mental bondage he places her in as well as she would hold in physical bondage, even once she is unable to communicate or see because of the needles piercing her lips and eyebrows.

You can see more of Miss Chaos’ ongoing training at ThePainFiles