Bondage doesn’t have to be wrapping a slave up in rope until she cannot move.  Sometimes, the simplest and most fun bondage is the bondage that puts a slave in a position where she doesn’t want to move, for fear of causing herself more discomfort than she’s already in.  This is often referred to as predicament bondage, and can be very useful when training a slave not to move around and fidget when she should be holding position.

Emma-Louise is a skinny brunette slave who’s nervous moving around often annoys her Dominant quite badly, so she is taken into the dungeon in order to try and train this habit out of her.  Her Master begins by attatching pegs to her nipples and pussy lips, and attaching them by elastic strings to the winch over head.  As he lifts the winch, she follows up, until she is resting in a crab position. 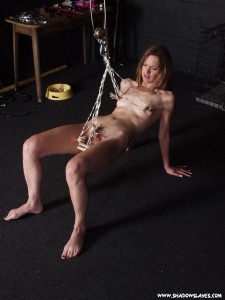 Once she is there, any movement she makes pulls on the pegs and causes her pain.  The only way she can stop the pegs pulling is to hold perfectly still.  It’s easy to begin with, but over time her muscles begin to tire and she must work hard to hold position.