Charlotte Vale is tied up and helpless at the hands of Damon Pearce and Sister Dee.  The bondage in iteself is strenuous enough 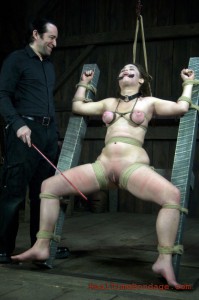 Add to that the cane on her exposed inner thighs and she’s going to start struggling.

But for Charlotte, this is the end.  This is the finale of hours of torture at the hands of the Real Time Bondage Tops and members.  She’s been pushed in so many ways, in so many different directions.  She’s been entirely helpless to stop the flow of tortures coming at her from all angles.

This sort of experience is at the extremes of what a slave can deal with.  To endure for this length of time, to suffer for so many unseen faces takes strength.  Physical strength and mental.